What have you done for me today?

As professionals, we all remember the first project that we got to sink our teeth into… You know what I’m talking about – we’ve cut our teeth in various programs along the way, but at some point in time, our handlers turned us loose, althoug we knew that they were nearby. They were giving us just enough rope to do some damage, but not enough to hang ourselves. 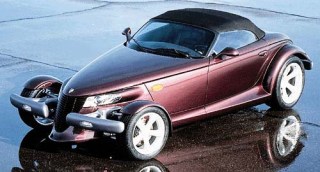 For me, that opportunity was the Plymouth Prowler. The hot rod throw back was born out of a concept that famed designer Tom Gale had sketched. Response at the North American International (Detroit) Auto show was strong, and after a short feasibility study, Craig Love and his management team got to work on selecting their design and development team to take the vehicle into production.

Two decisions, in my opinion laid the groundwork for the success of the Prowler. First, the designers and engineers were given the directive to change paradigms in terms of materials, design, manufacturing, everything. This opened the door for engineers to boldly move forward with assurance that mistakes were going to happen, and (gasp) were expected. The important change in mindset here was how the team reacted to those mistakes – by moving quickly to make things right.

Secondly, the team that was assembled was a study in contrasts. You had a bunch of hot shot punks with a youth, guts, and determination on their side. And they were teamed with a cast of more mature, experienced hot-rodders, guys and gals that had built their own hot rods – honest to goodness motorheads that drank race fuel and farted flames.

Paul Doolan was one of those grey haired flame farters that I would exchange greetings with each morning as we passed each other on the way to our respective offices. As we shook hands, Paul would ask me the same question every day, “What have you done for me today?” As Paul would deliver his query, we’d both chuckle. But over time, Paul established himself with me as a knowledgeable and inspirational leader, and that simple question grew in personal significance.

Each morning, I needed to be able to respond with something that I had indeed done for Paul in the last 24 hours. It became my personal obsession (and in turn the obsession of those who worked with me) to be able to deliver each day. Some day the results were more profound, “We resolved that design issue with the rear bulkhead”, and others maybe not so profound, “We locked in the coating for the seat supports”, but the mindset that his single question instilled in me was bedrock!

The reason that the question worked for Paul (and for a good number of the other respected managers) was that he was legit! An engaged manager of people – his actions were in line with his words, and he understood that while he was managing a program, people were at the core. Having that connection with your team is foundational to being an effective leader, and Paul was one of those that “got it”.

Afterwards, we moved on to different projects, but when we did cross paths, I knew what question to expect when we stopped, shook hands, and smiled at one another.

A long time resident of Southeastern Michigan, I am husband to the beautiful Trisha and father to three incredibly bright, compassionate, amazing young adults. I have been called husband, father, brother, friend, demon, scoundrel, team-mate, leader, misfit. I constantly seek personal and professional environments that encourage creativity, empower individuals, and foster excellence. alfamehl.com is an opportunity to share thought and opinion based on my personal and professional experience. My passion for learning remains the driver to become a better friend, husband, and father. The focus of my professional efforts (and satisfaction in what I do) is developing effective teams and equipping others to become exceptional leaders. My personal mission statement: to inspire, to love, to promise, to share, to believe that nothing is impossible
View all posts by Jeff →
This entry was posted in Career, Leadership, Motivation. Bookmark the permalink.